The Company's image, brand reputation, credibility and employee morale are generally inferred positively based on the external looks of the facades. It's just goes on, in the similar lines of good old adage "clothes make a man" in the same way "facades makes a building". Facade is a cosmetic skin engineered to have great aesthetics, performance in terms of bringing ample light, maintaining temperatures and ensuring thermal resistance, reducing the dead load and acting as a rain screen to protect from extreme weather conditions, that's no wonder, why the corporate spend so much on their facades? Facades in India is predominantly build with Glass, ACP, HPL, GRC, Metal sheets, steel, tiles and granites etc. 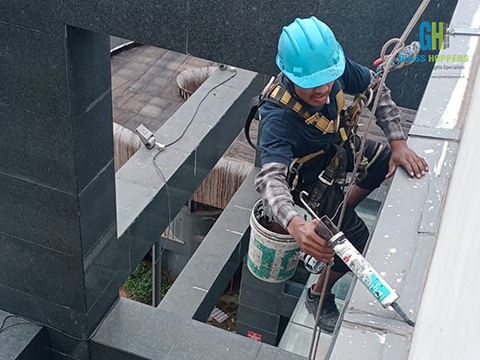 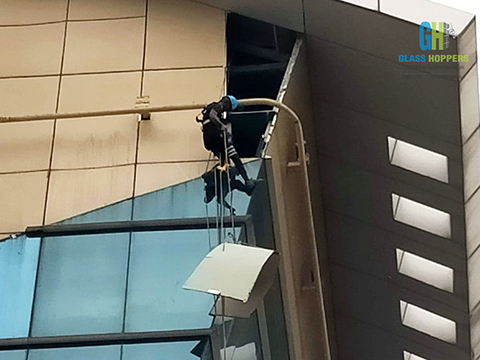 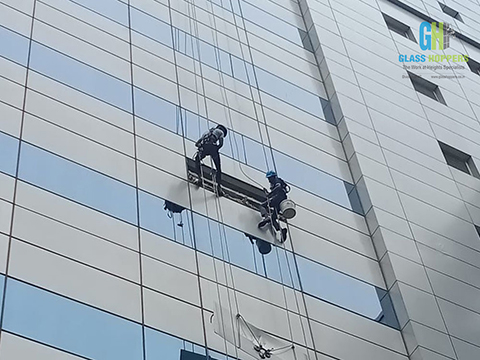 Glass Hoppers the name synonymous with Facades provides various facade maintenance services based on the facade system & facade access system". Glass hoppers provide various facade maintenance services to upkeep, protect and to enhance facade performance. In general all facade repair services are provided through industrial rope access professionals as it is most economical and a safe system.

Any other work at heights systems like cradle, boom and scaffolding may not be most conducive system in terms of cost, time, efficiency or physical movements. Our facade maintenance services include the following:

These services are generally provided when water seeps in through the facade. However the appropriate water proofing solutions for the facade depends, based on the system of glazing and claddings used.

In general water proofing sealants like DC-789 or DC-791 of Dow Corning, Mccoy or Boss Sealants are used. Silicone Sealants are not the only barriers, there are other solutions like EPDM rubbers gaskets, Flashings & Trims, End Copings, Backer Rods, Foams and Cover Cap Systems or a simple open groove or PES systems that acts as a barrier to keep water outside the facade and the most suitable barrier is decided based on the existing facade system that has been installed at the site and location of leakage, for instance, whether it is between the glass and the frame or between civil periphery and the system, or through voids in claddings, flashings, trims etc. It is even more important not seal the voids or weep holes with sealant applications that has got a specific purpose to perform. Facade barriers are very important to resist infiltrations and exfiltrations of air movements.

These are periodical services provided to upkeep the facades, to make the facade look gleam and shine throughout the year at a nominal cost. These are important services in commercial high rise buildings as the occupants get to see a clear vision through the glass panes, and if the same is not cleaned periodically, the dusts, dirts and water strains sit on the glass and spoil both the glass and the view.

The chemicals used for cleaning the facade are generally non acidic and both user and glass friendly chemicals like diversey, buzzil roasari etc. The no of services required depends upon the location of the facade, how prone it is to the dirt? Requirements of the occupants and the industry to which client belongs to, as hotels, tech parks take frequent services. In general we suggest 4 facade cleanings services per annum. Facade cleaning services are normally provided by industrial rope access professionals with sufficient training, adequate experience and safety imbibed with all necessary PPE, Twin Rope Access System with all compliance documents, including but not limited to test certificates, insurance, JSA & method statements etc.

The facade glasses on the curtain wall system, spider glazing system may over a period of time break due to nickel sulphide excesses or due to operational/handling damages or due to excessive wind pressure.

These glasses generally do not fall from the facade as it is held to the child frame and they are heat strengthened, however it could fall anytime, therefore it is important to replace the facade glass as when it breaks.

The facade glasses can be replaced without any batch color difference, had the client had procured attic stock and stored during construction time; if not, matching the color would become difficult. In cases of imported glasses, colors cannot be matched. Glasses can be matched, if it is generally available in saint gobain pallet.

The glasses are deglazed, new glasses are held to the frames either through DC-995 sealants or through bolts only in case of spider systems and thereafter, the periphery of glass to be sealed with weather grade sealants to avoid water ingress. The temporary cover plates are removed from the glazing after ensuring the glasses are completely bonded and sealants cured after 72 hours, these practices you cannot find with small time vendors.

Facade Glass Replacements services are a tricky engineering challenge, as the glasses are manually lifted to the position and loads shall not be passed on to the RAP, therefore the facade glasses shall be held to the independent system, till it is fixed to the position.

ACP, HPL or any other cladding materials are manufactured only on batches and no batch will remain in the same color, meaning there will be visible color difference between batches and thus replacement of the old ACP with new ACP sheets, will have minor color differences, that we have to live up with.

ACP sheets are generally fabricated in 2 ways, though the framework is same for both with a slight spacing difference. Both the ways are given below:

The applications methods are very important for durability of the claddings. Tray is the most robust system among the both. Stick is easy to install system and generally fabrication friendly hence preferred by most fabricators. However the ideal system is tray application.

Common   reasons for ACP Repairs and replacements are method of application, breakage of routing, wind pressure, improper fixing arrangements, larger spans without hat sections, and sealants worn off over the period time due to expansion and contraction and bird biting etc.

Lifting of the ACP to the position is similar to glass lifting as explained above. The ACP sheets can be sourced from myriad of suppliers namely Alcopanel, Alu Décor, Timexbond, Alstrong and Viva Bond etc. Almost all the companies source coil from keynar, coating system is PVDF with LDPE sandwiched between aluminium skins of .25 & .50 thickness, making it  light weight when compared to glass. Glass Hoppers with in-depth knowledge provide facade ACP Cladding Replacement Services to large no   of corporates.

louvers are the architectural elements either used to cover shafts or places where light and ventilation is important, the modern day facades treats louvers as an architectural element too. There several louvers systems like Z louver system, Aerfoil system, louvers by fameline and louvers by hunter douglas. The louvers generally fail due to wind pressure or improper installation.  Glass Hoppers are pretty conversant in handling and installing any louver system, even if it has to be customized or fabricated indigenously to retrofit. Louver color systems are either powder coated or anodized. Should you have any requirement for Facade Louver Replacements Services, please call Glass Hoppers.

This is a kind of an audit services that is done once in 5 years to check whether the facade glass, ACP Panels, open-able panels, Sealants and other Architectural items are intact or not. This is done by pulling each and every panel by applying a mild load. This kind of an audit gives an idea to the management whether the facade is stable or not. The management can be sure and avoid any potential damage that could arise by falling glasses or sheets from the facade. This service is generally sought by corporates, hotels, hospitals and tech parks to mitigate unseen public liability arising out of such contingencies. Glass Hoppers provides facade checking services and facade audit services and reports on observations panel by panel and also devises rectification plans if any deviations observed.

Facade checking and Facade Testing are 2 different services, facade checking services are done aperiodic on the existing facade while facade testing is done on the newly commissioned facade, as a onetime activity.

Should you need any of the above listed facade maintenance services or facade repairs services, please contact Glass Hoppers.

The guys are unimaginable, they were fantastic, as the name suggests they were flying in the Roof truss nothing short of international company.

The team at 4C has always provided our firm with excellence. Their reports and recommendations are prompt, informative and extremely well detailed. The involvement of 4C in our project exceeded our expectations as always.

How Can We Help?

If you need any help, please
feel free to contact us.