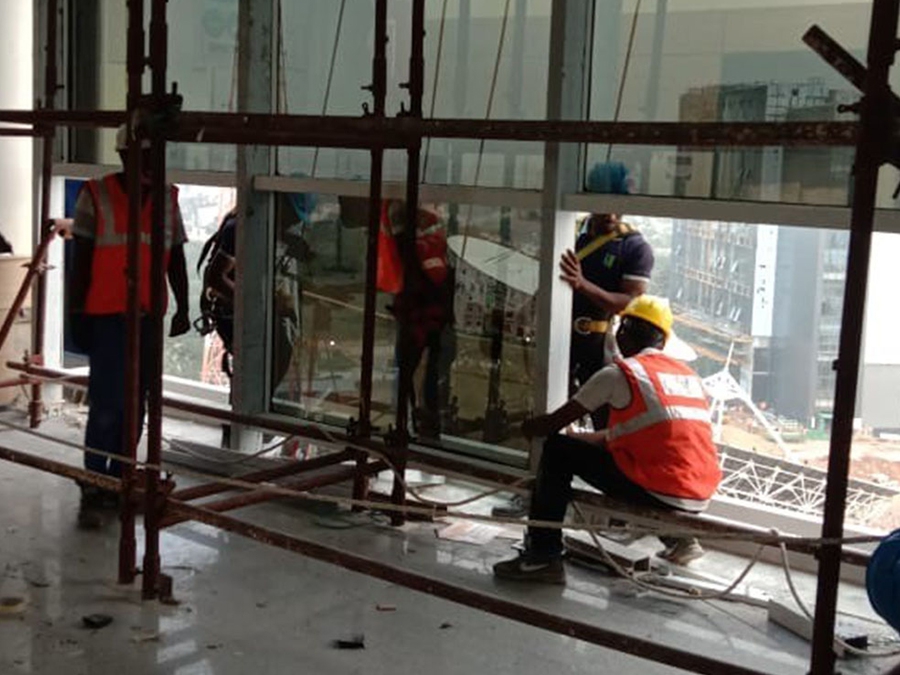 A Singapore based client, wanted to bring a power generator into its data centre at 6th and 7th floor of a building which was enveloped with facade glazing & facade ACP. The generator could not have been brought otherwise either through stairs or through service lift and hence the need for opening up the facade was devised. The client approached “Glasshoppers” for the following facade retrofitting services:

The client was pretty emphatic in spelling out their requirements but what are the challenges in opening up an existing facade, that to somewhere from the middle of it.

Believe me, its good damn interesting!

Yes the facade was accessed, through Industrial Rope Access Professionals instead of scaffolding and in-fact the whole work was installed through rope access.

Before facade glasses were removed, a new set of glasses, mullions, transoms and flashing sheets were ordered and stacked ready at site.

The facade system was designed and built as move-in & move-out, bolt and nut system.

The facade glasses were removed; mullions and transom were cut and terminated at 6th floor sill and 7th floor soffit level. Thus a huge void was created and the generator was crane lifted and brought in.

The new system was ready to install and we installed it and the periphery was flashed with ACP sheets so that there was no water ingress.

The whole work whether you call it facade retrofitting services, facade restoration services or facade glass replacements services, we completed it in 7 days time.

Should you need any works at heights services or any facade maintenance services or industrial rope access services, write to us @ jayanth@4ccs.in