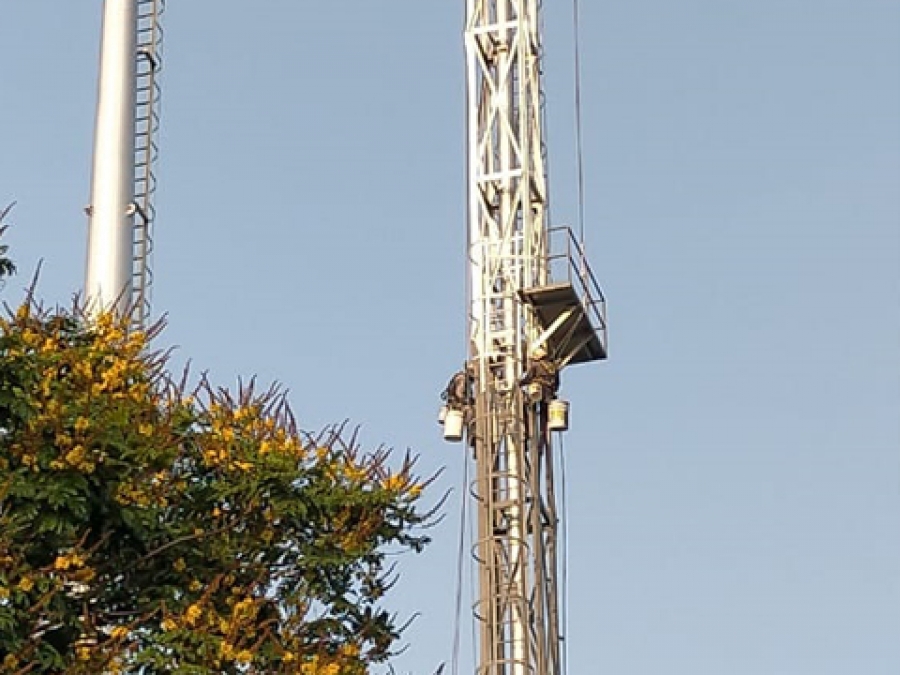 A Bangalore based contractor approached Glass Hoppers to repair 120 Feet industrial chimney as the chimneys performance was low and was not emitting sufficient smoke through its crown.

The job in hand was to do the following:

The factory chimney was a working chimney and cannot have too much downtime and this means the client is looking for a quick fix solution.

The Industrial chimney stack was made as a 6 part system, each being 20 feet in height and approximately 300Kgs. The topmost part that runs from 100th feet to 120 feet needs to be removed and replaced.

Rigging & Removing the Industrial Chimney at 120 Feet Height with an approx weight of 300kgs was an uphill task.

Team Glass Hoppers deputed Industrial Rope Access Professionals (RAP�s) and One RAP physically climbed through the cage ladder and measured the mouth of the chimney.

The next day the mouth of the Industrial chimney was designed and detailed in such a way that could receive the larger mouth of the new chimney stack.

A new industrial chimney stack was fabricated with not only a larger dia but in such way that it would be compatible with the existing factory chimney and there would not be any leakage.

An 100 ton crane was put in the job, the RAP climbed the Chimney stack, reached the top at 120 feet and rigged the existing factory chimney to the crane and also removed the bolts at the 100 feet.

The crane lifted the industrial chimney stack and stacked it to the ground, the new ready chimney stack was rigged and lifted by the crane and installed at 100 feet, where the RAP bolted it.

The new industrial chimney is commissioned and cage ladder was extended and welded at the top chimney stack.